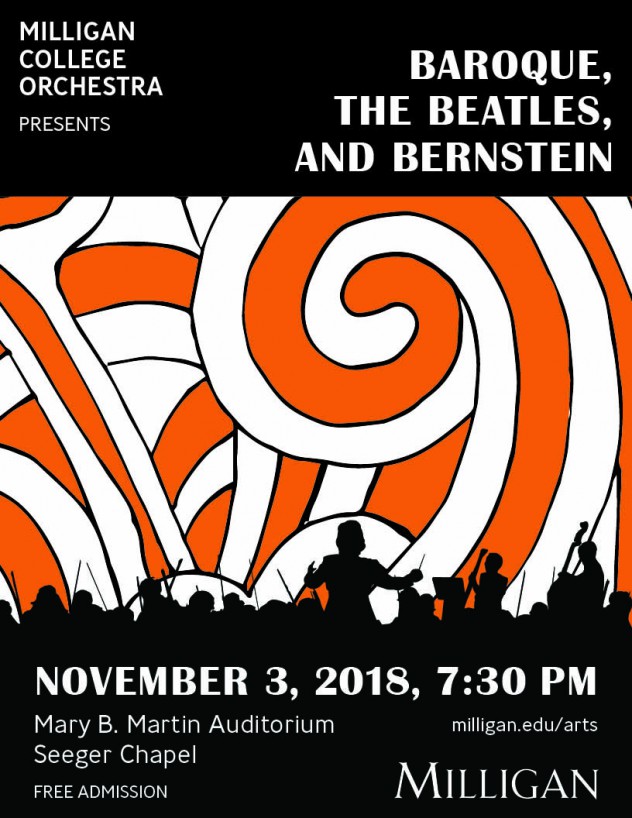 The Milligan College Orchestra, under the direction of Dr. Kellie Brown, will present a fall concert, “Baroque, the Beatles and Bernstein,” on Saturday, Nov. 3, at 7:30 p.m. in Milligan’s Mary B. Martin Auditorium located in Seeger Chapel. This concert will feature an eclectic array of string works from the Italian Baroque master Vivaldi to the classics of the British Invasion. This event is free and open to the public.

Milligan guitar professor James West will perform Vivaldi’s “Guitar Concerto in C Major.” Mr. West joined the Milligan music faculty in 2017 and in fall 2018 founded Milligan’s first guitar ensemble. In addition to the music of Baroque composers, the orchestra will showcase the timeless tunes of the Beatles, including “Yesterday” and “Eleanor Rigby.”

The highlight of the evening will be a celebration of the 100th anniversary of the birth of the iconic American composer Leonard Bernstein. Milligan’s concert will join with over 2,000 musical events spanning six continents to honor Bernstein’s centennial.

The orchestra will perform concert works by Bernstein, including “Danzon.” His beloved music from “West Side Story” will bring excitement through the vivacious rhythms and tunes of “Cool,” “America” and “Tonight.”

“The impact of Bernstein’s music, not only on the history of music in the United States, but throughout the world, cannot be overestimated,” said Brown, who serves as professor of music and area chair. “The Milligan Orchestra is thrilled to salute the work of such a musical genius and to celebrate this person who contributed so much to the fabric of American culture.”

Klofach, will take the stage with Dr. Noah DeLong, associate professor of music, as they join the orchestra to sing two of Bernstein’s most beautiful songs: “One Hand, One Heart” from “West Side Story” and “Make Our Garden Grow” from “Candide.”