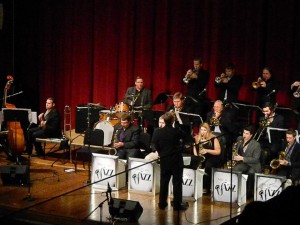 The Milligan College Jazz Ensemble will perform a variety of jazz styles in celebration of “Jazz Appreciation Month” on Monday, April 27, at 7:30 p.m. in Milligan’s Mary B. Martin Auditorium in Seeger Chapel.

The spring concert will feature the college’s 21-piece ensemble, under the direction of Rick Simerly, associate professor of music, along with special guest tenor saxophonist, Doug Henry.

A resident of Charlotte, North Carolina, Henry started playing tenor saxophone in 1961 and has performed throughout the country with artists including Stevie Wonder, Aretha Franklin, The Four Tops, The Temptations, Tony Bennett, Harry Connick, Jr. and numerous others. He holds a Master of Arts in music education from the University of Alabama and has taught for 39 years. Now retired, Henry has continued playing Broadway shows and touring the world with the Tommy Dorsey Orchestra.

“Without a doubt, Doug Henry is one of the greatest tenor saxophonists I’ve ever heard,” said Simerly. “We are excited for audiences to hear him perform with our ensemble at this very special jazz performance.”

The Milligan Jazz Ensemble consists of Milligan students as well as students and adults from throughout the region.  They will be performing a variety of songs from the libraries of Stan Kenton, Charlie Parker, Duke Ellington, Count Basie, Buddy Rich, Duke Jordan and Kenny Dorham.